“You are braver than you believe, stronger than you seem, smarter than you think, and loved more than you’ll ever know.” —A.A. Milne

I believe that taking the risk to show up consistently in an area where I had little control over the outcome have been moments of courage in my life. At the same time, I have to say that they were also moments of vulnerability.

This is an account of the time when leaning into vulnerability became an unexpected form of bravery for me. To tell this story, I will recount one of the most uncertain time periods in my life, which came when I tried to transition to a different professional career at the age of 31.

I had quit the field of architecture to try two different professions that I soon learned were not sustainable for me. After a brief return to the world of architecture that confirmed my initial decision to leave it in the first place, I was back at the drawing board to figure out what I should be doing for a living.

By that time, I was very disheartened. A year spent making two unsuccessful attempts to transition careers had all but eroded my confidence. I felt too paralyzed to make a third attempt at a different profession. I believed that after two tries, I had no more room for error. I told myself, “You’ve failed twice, so a third failure is not an option.” Unsurprisingly, this mindset resulted in my being very risk-averse in my career search. In evaluating potential careers, I devoted my attention almost exclusively to the risks involved should it not work out like the last two.

It was my Mom who pushed me to give the field of Interaction Design (UX) a chance. She said there is always a risk that things may not work out, but there is also a chance that things will work out. Her advice to focus on the rewards and positive outcomes that lie on the other side of risk-taking was the beginning of my shift towards a growth mindset.

Standing at the crossroads, I was caught between the weight of my two past attempts that ended in failure, and the uncertain future of making a third attempt.

There comes a moment when the cost of inaction is greater than the cost of braving the risk into the unknown—and this was that moment for me.

My friends and family had opened the door for me to give a good outcome as much of a chance of happening as a bad outcome. And so with their love and support, I began a formal apprenticeship in interaction design.

The Beauty in Uncertainty

My interaction design apprenticeship lasted for about a year. For almost every day during that year, I showed up at a local coffee shop named Canabru, where I would log “study shifts” of eight or more hours to learn a new discipline while battling anxiety. In hindsight, every day was an exercise of faith. There were no guarantees that studying for 48+ hours a week will materialize into a future career.

Dr. Brené Brown in her seminal work Dare to Lead defines courage as choosing to show up in areas where one cannot control the outcome. I could not think of a better summary for that entire year. I did not realize that consistently showing up to make a third attempt at a new discipline after two failed attempts was the very definition of vulnerability and courage.

As I progressed in my the apprenticeship, I began to focus on what I can do in the present to set myself up for success instead of worrying about the future. I counted my blessings in that I had enough personal savings to give undivided attention to this effort. Also, I got to study with my best friend, who was working towards her doctor of optometry degree at the time.

To my surprise, I began to trust myself again. My confidence also grew when I realized that I had taught myself enough frontend coding languages to be dangerous.

An Unexpected Form of Bravery

About a year after I started the apprenticeship, I was proud to have completed my final project, designed my portfolio website, and hand-coded said website from scratch. I put the finishing touch on my resume and began an earnest job search in the middle of November. Although many companies were freezing their hiring efforts as they prepare for the upcoming year, I applied anyway.

The most exciting moment came when I was invited to the final round of interviews for an Interaction Designer position by two great companies. Truthfully, I was both ecstatic and apprehensive at the same time. I knew I could end up with two offers, one offer, or none.

In that vulnerable moment, I decided to respond differently than I had in my entire life. Instead of waiting for the official job offer letter to celebrate, I chose to celebrate myself for taking the risk to apply for a role in a new field. It was important that I recognize myself for the courage it took to move towards a new profession, where I will have the opportunity to make a difference at a scale I can only dream of.

And so I bought myself a simple ring before going into the two final interviews. That ring became a personal reminder to value myself and believe in my potential—regardless of the outcome of my risk-taking. Happily, I received job offers from both companies, but it could have just as easily gone the other way. I was building the habit of rewarding myself for having the courage to take risks towards a goal, instead of just rewarding myself when a goal is reached.

Today, I make it a practice to reward myself for moments when I am taking risks instead of moments where my risk-taking pays off.

All in all, navigating through the uncertainty of a career transition was both messy and beautiful at the same time. There were moments when project setbacks and job rejection letters made me question whether I should keep trying. But there were also moments when I realized how far I have come. The Rachel that struggled through two failed attempts at transitioning careers, is the same Rachel that walked towards a bright future in the field of Experience Design.

I learned that leaning into vulnerability is a form of courage when one is facing the unknown—and it turns out that I am braver than I believed. 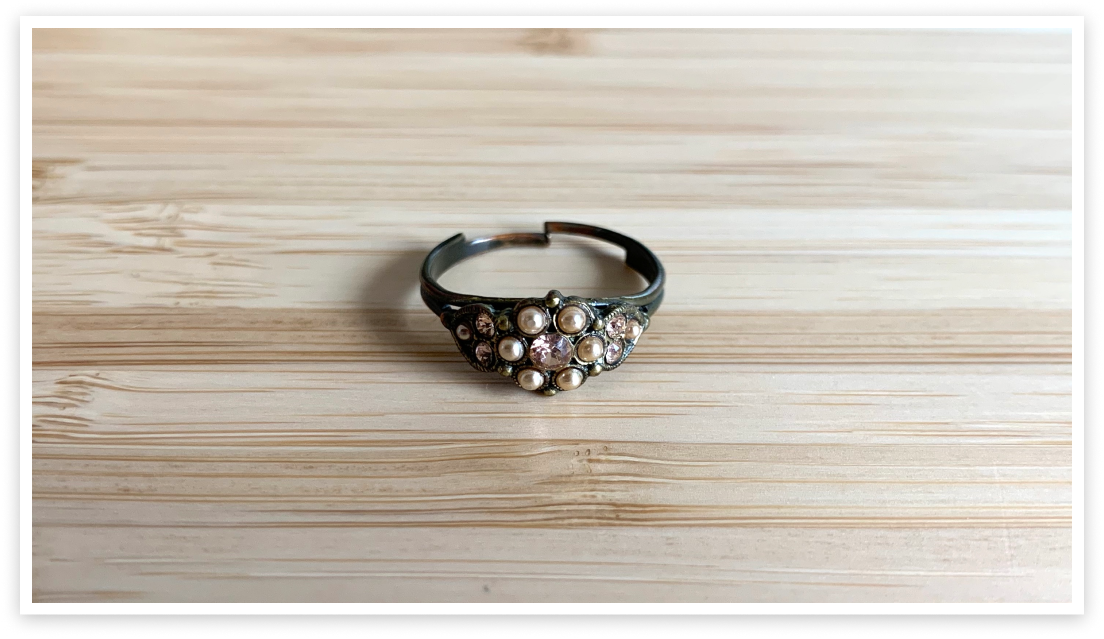 This is the ring that I got for myself, just before going into the two final interviews.
Copyright ©2020 by Rachel Atmadja
All rights reserved. No part of this publication may be reproduced, distributed, or transmitted in any form or by any means, including photocopying, recording, or other electronic or mechanical methods, without the prior written permission of the author, except in the case of brief quotations embodied in critical reviews and certain other noncommercial uses permitted by copyright law. For permission requests, write to the author at ratmadja@gmail.com.

Creating a thought framework to design intelligent entities (AI) from the starting point of empathy. This framework acts as a bridge between the human language of empathy with the machine language of implementation.